This is the primary institution responsible for promoting and protecting human rights in Africa through its oversight and interpretation of the African Charter. The African Commission consists of 11 Members (Commissioners) serving in their personal and independent capacity. The Commissioners are elected by the AU Summit (formerly the Assembly of Heads of State and Government of the OAU).

The functions of the Commission shall be:
1. To promote Human and Peoples’ Rights; and in particular:

(b) to formulate and lay down, principles and rules aimed at solving legal problems relating to human and peoples’ rights and fundamental freedoms upon which African Governments may base their legislations;

(c) co-operate with other African and international institutions concerned with the promotion and protection of human and peoples’ rights.

2. Ensure the protection of human and peoples’ rights under conditions laid down
by the present Charter.

3. Interpret all the provisions of the present Charter at the request of a State Party, an institution of the AU or an African organization recognized by the AU.

4. Perform any other tasks which may be entrusted to it by the Assembly of Heads of State and Government.

Within its promotional mandate, the African Commission has appointed Special Rapporteurs, Working Groups and Focal Points to deal with specific thematic issues – namely:

These special mechanisms play a very significant role by researching, gathering and documenting information on these areas of human rights. 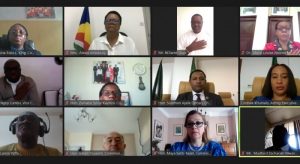 On June 29, during its virtual 28th Extraordinary Session, the African Commission on Human and Peoples’ Rights (ACHPR) swore in four new Commissioners who will begin six-year terms. They are: Marie Louise Abomo (Cameroon), Mudford Zachariah Mwandenga (Zambia), Ndiamé Gaye (Senegal), and Alexia Gertrude Amesbury (Seychelles). [ACHPR Press Release; ISHR] The Commissioners were appointed during the 33rd Ordinary Session of the Assembly of Heads of State and Government (the Assembly) of the African Union (AU), which took place from February 9 to 10, 2020, in Addis Ababa, Ethiopia. The gender balance of the ACHPR will remain the same, with six members who identify as female and five who identify as male. The new Commissioners join the continent’s human rights body at a time when some AU Member States are pushing back against human rights norms and regional oversight.

The ACHPR has not yet published the new Commissioners’ biographies on its website; therefore, the information provided below reflects only what is publicly available.

Marie Louise Abomo (Cameroon) is a Supreme Court Judge and President of the Judicial Chamber of Cameroon. [JournalduCameroun]

Ndiamé Gaye (Senegal) is a Magistrate and President of Chamber at the Court of Appeal of Thiès in Senegal. According to a 2012 CV available online, Commissioner Gaye previously represented Senegal before the ACHPR and the UN Human Rights Council. Commissioner Gaye is on Twitter.

Alexia Amesbury (Seychelles) is a politician and human rights lawyer. [Seychelles News Agency] She is the first person from Seychelles to ever serve on the Commission. She will fill what is referred to as the “floating seat.” See Decision 784(XXXIII) on the Appointment of Four Members of the African Commission on Human and Peoples’ Rights (ACHPR), Doc. EX.CL/1225(XXXVI) in Assembly of the African Union, Thirty-Third Ordinary Session: Decisions, Declarations, Resolution and Motion, p. 91.

Prior to the end of the ACHPR’s ongoing 28th Extraordinary Session, the new Commissioners will be assigned to “special mechanisms” or “subsidiary mechanisms” created by the Commission – such as working groups, committees, and special rapporteurships – under Rule 23 of the 2010 Rules of Procedure. See IJRC, ACHPR: Composition & Election Process. For example, outgoing Commissioner Lawrence Murugu Mute held the role of Special Rapporteur on Freedom of Expression and Access to Information and outgoing Commissioner Lucy Asuagbor held the role of Special Rapporteur on the Rights of Women; both will need to be replaced. See ACHPR, Current Commissioners.

In October 2019, the ACHPR elected Commissioner Solomon Ayele Dersso (Ethiopia) as Chairperson and Commissioner Rémy Ngoy Lumbu (Democratic Republic of Congo) as Vice Chairperson. [HRW] They will serve for two years as the Bureau of the Commission. See ACHPR, Final Communiqué of the 65th Ordinary Session of the African Commission on Human and Peoples’ Rights.

The Commission is composed of 11 Commissioners, who are elected in their individual capacity and do not represent any State. To ensure that Commissioners do not serve as representatives of their countries, civil servants and diplomatic representatives are excluded from serving on the Commission. See IJRC, ACHPR: Composition & Election Process. Commissioners serve on the ACHPR for six-year terms (although sometimes vacancies mean new members are initially appointed to shorter terms), and may be reelected. They serve on a part-time basis and are paid an allowance while in session. See id.

The equitable geographic and gender representation is also considered when electing Commissioners. Pursuant to the 2016 Decision on the Modalities on Implementation of Criteria for Equitable Geographical and Gender Representation in the African Union Organs of the Executive Council (Doc. EX.CL/953 (XXVIII)) of the AU Assembly, there may only be two Commissioners from each of the African regions (East, Central, North, South, and West), and at least one of the Commissioners from each region should be female. The eleventh remaining seat is considered a “floating seat” and rotates by region. See id. Accordingly, during this election cycle, Commissioners were elected from the Central, Southern, and Western regions, and two are female. The “floating seat” was filled by a Commissioner from the Eastern African region.

The Executive Council of the AU elects Commissioners by secret ballot, and the AU Assembly confirms their appointment at its subsequent meeting. The four new Commissioners were elected during the 36th Ordinary Session of the Executive Council, held from February 6-7, 2020, and the Assembly decided on their appointment at its 33rd Ordinary Session, held from February 9-10, 2020.