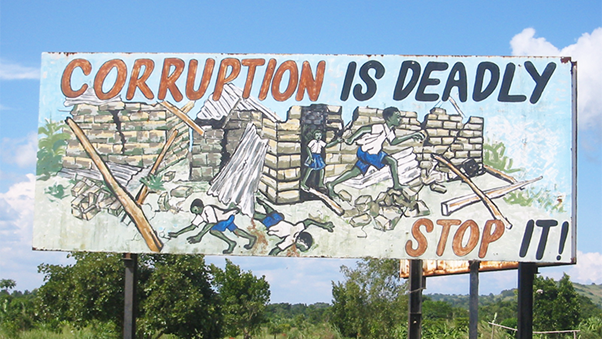 Introduction
The African Union’s recent declaration of 11 July as African Anti-Corruption Day – and 2018 as the Year of Anti-Corruption – turns the spotlight on universities and their role in combating the scourge in society and within institutions. On the sidelines of the recent 31st Summit of the African Union held in Mauritania, AU Commissioner for Human Resources, Science and Technology, Sarah Anyang Agbor revealed a well-known fact that corruption had spread to all sectors in Africa, including education. “Corruption has also spread in the education sector and we need to walk the talk. We believe that the African Union should not only ratify decisions, but implement them,” Sarah Agbor said at the summit held from 25 June to 2 July under the theme: “Winning the fight against corruption: A sustainable path to Africa’s transformation.”

Sarah Agbor emphasised the importance of tackling corruption in education as a “starting point” for all programmes aimed at building, developing and empowering the continent. Mahama Ouedraogo, head of the science and technology division and acting director of the Department of Human Resources, Science and Technology of the African Union Commission, agreed that universities should be at the forefront of the battle against corruption.

Re-imagining Education
Whilst AU Watch see a clear role for universities to be important partners in the battle against corruption, is it not the case of trying to close the stable doors after the horse has bolted? At AU Watch we recognize the matrix of reasons that keep Africa poor. We however agree with Geraldine Bedell (2009) of The Guardian newspaper who wrote that “no amount of aid, debt relief or trade is going to make a difference until the problems of corruption are solved: “Corruption is problem number one, two and three on that continent.” If we agree that corruption is the most devastating scourge in the continent that has blighted every sector and trumping all other social challenges, how is it the case that we intend only to challenge this plague at the adult stage of our lives? Wouldn’t it make more sense if tackle this menace at the start of life before we form ingrained and maybe irreversible habits and philosophies?

Traditional approaches to fighting corruption tend to focus on rules, compliance and enforcement. Regulations are passed and organizations are formed to root out graft. These efforts may provide part of the solution, but are often hamstrung or ineffective in places where opacity and patronage are ingrained, and where there is a gap between legal frameworks and everyday behaviors. To truly build systems and societies with integrity we need to rethink these approaches and close these gaps through reimagining education.

AU Watch is, therefore, of the view that anti-corruption studies should form part of all school’s curriculum, beginning at nursery and primary school with a view to promoting public awareness, personal integrity, civic responsibility, understanding of human rights and duties to society and the State. It is our view that we need to use education to build integrity from the bottom-up and that primary and secondary schools should be at the vanguard of a regional anti-corruption charge, whilst expecting the cavalry support from our tertiary institutions. What possible harm will come to Africa if we include anti-corruption studies into history, civic education, ethics, religious, literature and language lessons? Primary and secondary schools not only have a role in advancing knowledge, contributing to solving African problems and driving economic development, but the teaching of ethics and morals, appropriate behaviour and African traditional knowledge about living together, right from infancy might just be one of the keys to of a successful fight against corruption. To quote a Holy Book that admonishes parents to teach and train their children from infancy about good citizenship: “These words that I am commanding you today must be on your heart, and you must inculcate them in your sons and speak of them when you sit in your house and when you walk on the road and when you lie down and when you get up. Another passage from that Holy Book underscores the importance of the early training of children: “and that from infancy you have known the holy writings, which are able to make you wise for salvation …” . Indeed, all the holy books, including the Koran and the Torah emphasize the teaching of good morals and appropriate behavior immediately after birth.

As part of its contribution in fighting corruption across Africa, AU Watch’s Media, Communication and Education Team in collaboration with its Policy Programme Directorate, education departments in AU Member States, are developing anti-corruption syllabuses and programmes for primary and secondary schools. Fighting corruption demands a generational change, and students have to be the key constituents in this shift. This means that we have to teach and train Africa’s most important resource immediately after birth on anti-corruption, civic participation, open government and transparency. Why should it not be the case of organizing our schools to come together to support national and international networks of research and learning across Africa, in conjunction with governments, to ensure relevant lessons become the basis for shared action?

AU Watch’s media and advocacy teams will also be organizing schools workshops and leading debates on corruption, its effect on African development and how to combat it in the various countries it has chapters. It is also developing courses on the broader aspects of corruption and methods of fighting the scourge and making these courses available for tertiary education. Working with law schools, particularly, AU Watch will advance reflection on appropriate methods of detecting and curtailing corruption, and document successful cases of effective mechanisms and institutions to address the issue.

In collaboration with AU Watch’s ‘Nelson Mandela Leadership Forum’, AU Watch is also working with the Ministry of Education of The Gambia to develop immediate interventions that would entail workshops to train civil society and local leaders on ethical leadership and sound public policy processes.

Corruption presents a variety of unique challenges for both private and public sector managers. Corruption erodes trust in government and undermines the social contract. This is a particular cause for concern in Africa where illicit financial flows cost Africa from at least $60bn every year – the same amount China is offering to ‘buy’ Africa. Considering that African countries are spending on average 5% of total GDP of about $1.5 trillion on public education every year, this would mean that corruption is subtracting more than half of the resources that could finance education for the whole continent every year. If we account for the fact that a one-year increase in average tertiary education levels would raise annual GDP growth in Africa by 0.39 percentage points, and eventually yield up to a 12% increase in GDP, the opportunity cost of corruption on young people is staggering! For them this means lost job opportunities, marginal access to basic services, and often disillusionment and hopelessness. These mutual-reinforcing conditions are in turn fueling instability.

AU Watch has designed a unique multidisciplinary anti-corruption course specifically for primary and secondary schools across Africa. This course also provides students with an understanding of the theoretical, legal and operational concepts related to corruption as well as practical means to develop effective strategies for dealing with this very complex issue, even for these young minds. Using blended learning, interactive tools and an online and offline approach, the curriculum focuses on lessons, practices and ideas from a variety of domains and contexts. Topics range from public sector reform issues to information systems innovations, and will aim to build a learning agenda that can revolutionize anti-corruption approaches. It will create an active community of responsible leaders that have the relevant skills, policy ideas and strategies to fight corruption in the modern era.

Additionally, the courses demonstrate how new technologies, social media and strategic communications can be incorporated into effective anti-corruption strategies. At the end of both the primary and secondary school periods, students will be able to develop a deeper understanding of how to create an ethical society and understand the perniciousness of corruption on African economies. Students will also be able work with the ideas they develop through the process to implement real change and validate their learning through practice.

Tasks of anti-corruption education
1. Introduction of the corruption phenomenon: its essence, reasons and consequences.
2. Promotion of intolerance towards corruption.
3. Demonstration of corruption fighting possibilities.
4. Contribution to the standards that are already included in the curriculum of general education, i.e.:

• Values (respect for democratic values; interest in everything that is taking place; honesty, responsibility for one’s actions and behaviour; constant self-improvement as well as improvement of social and cultural competence and knowledge, etc.)

• Strengthening capacities (to communicate, find, process and transmit information; think critically and solve issues; plan rationally and organize activities; manage time, financial and other kind of resources; act creatively, with meaning, take initiative, be independent, take responsibility for one’s actions; communicate and co-operate, solve disagreements and conflicts in a constructive manner; take part in the social life of school, the local community, and society; if necessary, exercise leadership in implementing the plans, etc.

It is the view of AU Watch that education should be given back its original role – that of creating education geared to student needs and new knowledge. The ultimate result is to mould Africa’s young minds who are aware of the threats posed by corruption to the public well-being and state security, intolerant towards the manifestation of corruption, able and seeking to eliminate the latter.
With President Donald Trump at the helm of world affairs, civic and political spaces for reformers seems to be shrinking globally. We need to find new ways to make sure we are building societies with integrity, supporting values-based leadership and ensuring that advocates for positive change have the skills and knowledge they need. Now is the time for us to reimagine education to fight corruption and AU Watch is at the forefront of such re-imagination.
It is worth quoting Amer Khayatt, Secretary General of the Arab Anti-Corruption Organization based in Beirut, Lebanon, who said education represented a platform from which to fight corruption. “We cannot fight corruption unless we are committed to freedom and justice; in other words, good governance. The tripod of good governance, fighting corruption and progress requires a platform. This platform is education.”