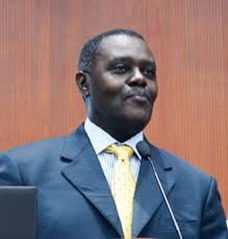 An Advocate of the High Court of Tanzania, Honourable Bahame Tom Murkiya Nyanduga is the Chairperson of AU Watch. He was the Chairperson of the Commission for Human Rights and Good Governance, the National Human Rights Institution of the United Republic of Tanzania. He also held the position as Independent Expert on the Human Rights Situation in Somalia, since may 2014. Between 2006 and 2012, he was also a Commissioner at the African Commission on Human and Peoples’ Rights (African Commission), where he held the position of Special Rapporteur on Refugees, Asylum Seekers, Internally Displaced Persons and Migrants in Africa between 2005 and 2009. He Later rose to become Ag Chairperson of the African Commission in 2009.   Between December 1994 and December 2014, was the Managing Partner of Nyanduga law Chambers in Dar es Salaam.

To contact Bahame please email him at: [email protected]