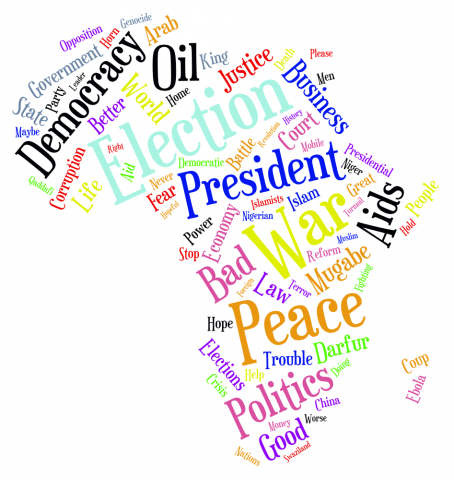 Since the first explorers, anthropologists and missionaries arrived on the continent, Africa has been given many labels. Most of these labels have largely been driven by particular paradigms and provide a one-dimensional narrative of Africa as a homogenous entity or a country, despite the enormous disparities that exist between African countries in terms of geography, history, economics, politics, culture, resource endowment etc. These labels have usually been negative – with that of the ‘Dark Continent’ having transcended centuries and generations – but recently we have begun to see some positive labels.

The new narrative of Africa Rising has taken precedence, with both the Africans and foreigners championing the story of a burgeoning Africa on the cusp of success. This new narrative has been a counter narrative to the global image of Africa as a disease ridden continent with starving children, oppressed women and savagery and war. The new paradigm reflected a more positive image of the continent, and yet the question has to be asked as to how accurate, realistic or real this image is. Is Africa really rising, or is this yet another example of overgeneralization and homogenization of an entire continent and its peoples?

The History of Labelling Africa

During the colonial period, Africa was described as the Dark Continent by the explorer Henry M. Stanley in his book “Through the Dark Continent” (1878). The reference to ‘Dark’ has been interpreted differently: first as describing a continent largely unknown and mysterious to Europeans; and secondly as describing the skin color of the inhabitants of the continent and their need for civilization, i.e. the Dark Continent was a racist description of Africa. A few years after the independence of most French colonies in Africa, a French agronomist Rene Dumont described Africa as being on a wrong track in his book entitled: “L’Afrique Noire est Mal Partie” (1962); painting a very gloomy picture of post-independence Africa. According to Dumont, Africa’s underdevelopment was not caused by unfavorable natural conditions, but by the failure of both colonial and postcolonial authorities to adopt more appropriate policies regarding technology, peasant agriculture, industrialization, education, civil service development, foreign aid, and regional integration. Then in May of 2000, the Economist labelled Africa as “The Hopeless Continent”, using Freetown to epitomize the failure and despair in Africa characterized by AIDS, wars, refugees, malaria, floods, famine, poverty, pestilence, government-sponsored thuggery, rape, cannibalism, brutality, corruption and despotism. It was from this revolting description that the idea of TrustAfrica was born.

The labels of hopelessness and wretchedness in Africa have, over the past few years, been replaced by a lot of exuberant talk and writings. McKinsey in June 2010 referred to Africa as “Lions on the Move”, an analogy of the Asian Tigers (South Korea, Taiwan, Hong Kong and Singapore). More than a decade after referring to Africa as a hopeless continent, the Economist of December 2011 wrote: “Africa’s Hopeful Economies: The Sun Shines Bright”. Then followed Goldman Sachs in March 2012 with “Africa’s Turn”, Time Magazine (December 2012) with “Africa Rising”, Le Monde Economie (April 2013) with “L’Afrique est Bien Partie”, and thus the emergence of the Africa Rising narrative.

Why Africa is said to be Rising The most prominent and widely debated label has been that of “Africa Rising” painted by the Economist. Like most of the other recent positive labels, the Africa Rising narrative has been driven largely by recent GDP growth figures in Africa averaging over 6%, rising per capita incomes, a large and growing middle class (350 million as estimated by the AfDB, 2011), rising investment and trade (both exports and imports), the rising number of billionaires, the explosive growth of mobile phones and mobile phone banking, more favorable ratings from Rating agencies and the rising rate of urbanization with sprawling mega-cities like Lagos, Nairobi, Johannesburg, Addis Ababa, etc.

However, a number of questions persist: Are these the relevant or only indicators to gauge Africa’s progress and development? Do these features cut across Africa? Are the trends sustainable? Are these the indicators used to judge the rise of other countries before now? Does this warrant all the hype about Africa Rising?

The False Rise of Africa or Debunking the Africa Rising Narrative

A completely different story can be told of the African growth statistics. First, it is largely driven by natural resource extraction and it is both very unstable and unsustainable – projections of 4.5% growth for 2015 at the beginning of the year have been revised down to 3.75% (IMF, 2015); the over 6% average growth rates that gave rise to the Africa Rising narrative have vanished. Second, African growth is very unevenly spread throughout the continent with oil exporting countries growing at 9.2% while fragile states grow at 2.8% between 2004 and 2008. The one-dimensional analysis of growth in Africa does not make sense. Third, Africa’s growth has not been inclusive and hasn’t been accompanied by a sufficient increase in productive formal employment, especially for the 7 to 10 million young Africans who enter the labor force every year. Previous blogs have already highlighted the statistics on growing unemployment and poverty in the same period, so I will not labor the point. However, considering the unrest in North Africa, youth underemployment, if unaddressed, can increase the risk of urban unrest and possibly violence in Africa. Fourth, Africa is growing but it is still the poorest continent, with nearly 50% of the population in Sub-Saharan Africa living on less than US$1 a day: the world’s highest rate of extreme poverty (AfDB, 2012). Fifth, in addition to being the poorest regions in the world, Africa is also the world’s second most inequitable region after Latin America. As the last post reflected, inequalities have not diminished over time but rather have increased – in 2010, six out of the 10 most unequal countries worldwide were in Sub-Saharan Africa.

Historically development has been understood to imply or has been synonymous with industrialization. Virtually all cases of high, rapid and sustained economic growth in modern economic development have been associated with industrialization, particularly growth in manufacturing production. The recent hype about Africa Rising ignores the key role of manufacturing in development. Africa is the continent with the lowest level of industrialization in the world and the manufacturing share of GDP has declined across all the sub-regions of the continent; it declined from 15.3% in 1990 to 10.5% in 2008 in all of Africa (UNCTAD/UNIDO (2011). The Economist (November 7, 2015 Issue) notes that “many African countries are deindustrializing while they are still poor, raising the worrying prospect that they will miss out on the chance to grow rich by shifting workers from farms to higher paying factory jobs”. If the proponents of Africa Rising are correct, then Africa is on course for ‘inventing’ a new trajectory for development in the world.

The rate of urbanization in Africa is the highest in the world – the share of Africans living in urban areas is projected to grow from 36 percent in 2010 to 50 percent by 2030. Urbanization if well planned and managed can be more efficient, as it makes it easier to provide water and sanitation to people living closer together, while access to health, education, and other social services also become more readily available. Megacities can facilitate cost-effective delivery of crucial services to the poor, with the potential to reap major economies of scale. However, African cities are growing so rapidly that planning is lagging behind and the cost of meeting basic needs is rising and new challenges created. The prominent features of Africa’s megacities include poor service delivery (water, sanitation, electricity, etc.), congestion, pollution, proliferation of slums, unemployment (rising informal employment and underemployment), increased inequality and urban poverty as well as the rise of new social ills such as drug addiction, gangs, etc. Africa is urbanizing so rapidly that the lives of a majority of their residents are getting worse. Appropriate policies and actions are urgently needed to enable the continent reap positive dividends from rapid urbanization. Though it is said to be rising, the private investment rate of 15% of GDP is about half of Asia’s. Most African countries still have an undiversified production structures, concentrated in primary commodities – which makes the economies extremely vulnerable. The infrastructure needs of the continent are daunting, characterized by frequent power outages, poor transport services, etc. Of the 20 least competitive countries in the world, 14 are African.

In terms of human development, African indicators don’t speak of a continent that is said to be rising. As measured by UNDP’s human development index (2015), 26 of the bottom 28 countries in the world are African; Afghanistan and Haiti finding themselves in this section due to war and the devastating earthquake a few years ago respectively. Infant mortality is still high – out of 1000 children born in Africa about 140 die before their fifth birthday. Healthcare systems are the weakest; the handling of the recent Ebola outbreak provides sufficient evidence. Africans have the lowest levels of human capital in the world. For example, only 5 percent of the eligible population is enrolled in universities (the same rate as in Asia and Latin America 40 years ago). Food insecurity and undernourishment are widespread in Africa which is net food importer, yet with 60% of the world’s uncultivated arable land. Angola, for example imports about 80% of its food needs. If Africa is indeed rising, then it is rising without its people.

The low level of political governance in Africa is not reflective of what a rising continent should look like. African countries always cluster around the tail of any ranking in the world measuring governance. For example, 9 of the bottom 17 countries in Transparency International’s Corruption Perception Index are in Africa. Similarly, of the 49 African countries included in Freedom House’s 2014 measurement of political rights and civil liberties in the world, only 10 are considered free.

Africa is definitely changing but the unguarded and triumphant message of Africa Rising is too soon and ignores the huge human underdevelopment, mal-governance, rising inequality, political instability, and unsustainability and economic risk that threatens the gains that have been made. Some countries like Ethiopia have achieved a lot over the past decade or so, but a lot remains to be done. Promoting inclusive growth and broadening the economic base beyond the extractive industries, implementing an industrial policy, designing appropriate policies and actions to building efficient, inclusive and sustainable cities to harness the potential of urbanization, are key for Africa to build a solid economic base from which to promote social and political development, and effectively rise in the eye of every observer.