More About Our Work 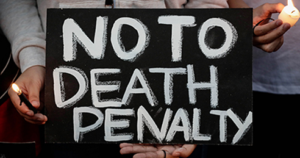 In April 2006, Oteng Modisane Ping was executed in Botswana. Neither his family members nor his lawyer had been officially informed of the date and time of his execution. Instead, they heard the news on the radio, after the execution was carried out in complete secrecy.

Ping’s mother had tried to visit her son in prison the day before his execution. Prison officials advised her to come back a couple of days later, while they were perfectly aware her son was due to be hanged the following day. Following his execution, Mr. Ping’s family did not have access to his body, they were not afforded an opportunity to ensure that he received a decent burial and they did not have the opportunity to visit his grave.

Many African countries are in favour of abolition. Rwanda abolished the death penalty in 2007, Burundi and Togo in 2009, Gabon in 2010, Benin in 2012, Congo and Madagascar in 2015, Guinea in 2016 for ordinary crimes and 2017 for military crimes and Burkina Faso in 2018.
As of today, 21 of the 55 African Union Member States have abolished the death penalty for all crimes.

Since 2017, AU Watch has been running programs in Africa aiming to help abolish the death penalty on the African continent. The projects target 23 African countries. 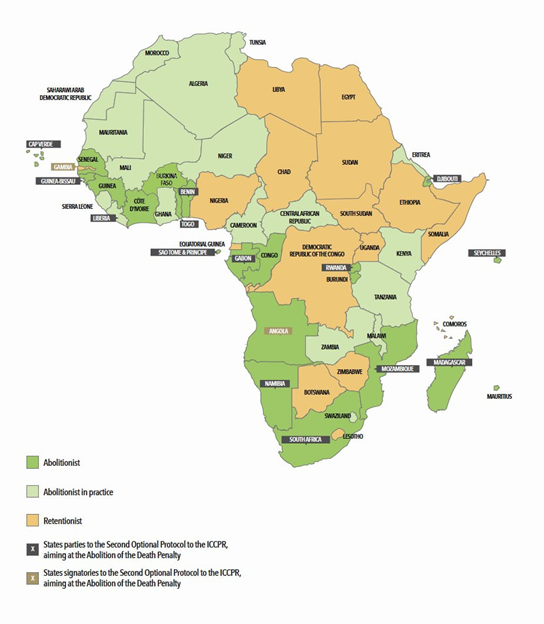 Working With the African Commission

What is the African Commission on Human and Peoples’ Rights?

Members
The Commission is formed by 11 independent experts who are nationals of State parties to the Charter, and meet for two 21 – day sessions each year which are held in April/May and October/November. The permanent Secretariat of the Commission is based in Banjul, The Gambia. The African Commission reports to the Assembly of Heads of State and Government of the African Union. The Commissioners serve in their personal capacities for six-year terms that may be renewed once.

Jurisdiction
The Commission has jurisdiction over the rights set out in the African Charter. Its duties include examining national reports on the situation of human rights which each State is required to submit every other year, adopting resolutions and declarations, country visits, and adjudicating communications (complaints) submitted by Member States, individuals, and NGOs.
The Commission has also developed a system of “Special Measures,” consisting of: (1) Special Rapporteurs to whom specific allegations of human rights violations in specific areas may be brought, and (2) Working Groups that monitor and investigate specific questions linked to the Commission’s work.
With the creation of the African Court on Human and Peoples’ Rights (under a protocol to the Charter adopted in 1998 which entered into force in January 2004), the Commission can also submit cases to the Court.

Reporting procedure
States must submit reports about their progress in implementing the African Charter to the Commission every two years. The reports are considered by the Commission in public sessions, following which it issues recommendations to the reporting State called ‘concluding observations’. However, over half of the State parties to the Charter have not yet submitted any report. Read more on the reporting procedure of the ACHPR.

Admissibility
State Parties, individuals, or NGOs may bring communications to the Commission, alleging that a State Party has violated a provision of the Charter. When an individual or NGO submits a complaint to the Commission, they must first exhaust any domestic remedies which exist, “unless it is obvious to the Commission that the procedure of achieving these remedies would be unduly prolonged.” Communications must be submitted within a reasonable time after local remedies were exhausted, must not be based exclusively on news from the mass media, and must not written in a way which insults or disparages the State or the U. Individuals may request confidentiality.

NGO Participation
NGOs can submit alternative reports when their State reports to the Commission, giving additional information about human rights in their country. However, this mechanism has been little used in practice as NGOs have been given very little time to review State reports.

NGOs often play a role in bringing cases to the Commission (under the complaints procedure), proposing agenda items for Commission sessions, and providing logistical and other support to the special rapporteurs, working groups and missions, as well as developing resolutions and new protocols to the African Charter.

How Does the Complaints System Work?
The Commission is authorised to consider both inter-State and individual communications about breaches of human rights. In fact, the Charter binds all State parties to accept the Commission’s power to supervise and monitor all rights. The Commission is a quasi-judicial body so its decisions do not carry the binding force of a court of law.
The Commission has special investigative powers to monitor emergency situations; that is, cases which reveal a pattern of serious or massive violations. It can do this through appointing experts, requesting States to adopt interim measures to protect victims, receiving testimonies, etc.

For the Commission to consider a complaint, it must meet certain ‘admissibility’ criteria. These include, that the complainant has taken their case to the highest court in their own country without success or the prospect of success, and, that the communication is not written in ‘disparaging or insulting language directed against the State concerned and its institutions’.
Read more about the complaints procedure to the ACHPR, including official guidelines for submitting a complaint.

Procedure
Applicants initiate a case through a letter of introduction. The Commission may decide to seize itself of the case, at which point the applicant is invited to provide submissions on admissibility, the State is given an opportunity to respond, and the applicant may file a reply. The Commission will then issue a decision on admissibility, and if the case is held to be admissible, the parties provide similar submissions and responses on the merits of the case.
Decisions on admissibility are usually made based solely on the written submissions, although the Commission may schedule an oral hearing. Oral hearings are more common at the merits stage, when they may be called by the Commission or requested by a party, although cases may be decided based solely on the written submissions.

Remedies
The African Charter does not specify the remedies which the Commission may recommend; rather, it empowers the Commission to make any recommendations it considers “useful” in a particular case. The Commission has made a wide range of recommendations, including publishing the Commission’s decision locally, the return of expelled from their country, the protection of natural resources, urging the withdrawal of troops, urging changes in a State Party’s law, and urging the release of detainee. The Commission has also recommended provision of compensation to the victims of the violations; however, when it does so it does not specify the sum to be paid, but rather recommends that the State provide “adequate compensation.”

Enforcement
The African Charter does not contain any provision for enforcement of the Commission’s findings and recommendations, which are not formally binding on AU Member States. However, the Chairman publishes a record of the Commission’s activities, including its Views, which is then submitted to the Assembly (Activity Reports). Special Rapporteurs may also instigate a dialogue with the relevant governments, approach the press, and collaborate with their UN counterparts to help implement the Commission’s recommendations. Finally, the Commission can refer cases to the African Court on Human and Peoples’ Rights.

How does the Commission deal with particular issues of concern?

The African Commission has established a number of special mechanisms to monitor thematic issues of concern in the region. Because children have all human rights, all special mechanisms apply to them as well as to adults, and every mechanism listed below can address breaches of children’s rights.

The current special mechanisms are:

Provisional or interim measures
The Commission can request that a State adopt certain measures in cases where there is a risk of serious or immediate harm to a person or a group.