International Day of Reflection on the Genocide in Rwanda 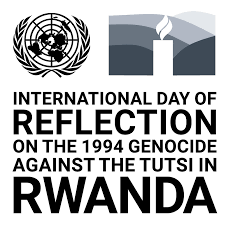 Every year, on or around that date, the United Nations organizes commemorative events at its Headquarters in New York and at United Nations offices around the world. The purpose of the day is also to honour the memory of the victims and pay tribute to the survivors while raising awareness among younger generations about the legacy of this genocide and the values of a culture of peace.

The Rwandan genocide, also known as the genocide against the Tutsi, was a mass slaughter of Tutsi in Rwanda during the Rwandan Civil War, which had started in 1990. It was directed by members of the Hutu majority government during the 100-day period from 7 April to mid-July 1994. An estimated 500,000 to 1,000,000 Rwandans were killed, constituting an estimated 70% of the Tutsi population.
Additionally, 30% of the Pygmy Batwa were killed. The genocide and widespread slaughter of Rwandans ended after the Tutsi-backed and heavily armed Rwandan Patriotic Front (RPF), led by Paul Kagame, took control of the capital, Kigali, and the country. An estimated 2,000,000 Rwandans, mostly Hutu, were displaced and became refugees.

The genocide was organized by members of the core Hutu political elite, many of whom occupied positions at top levels of the national government. Perpetrators came from the Rwandan army, the Gendarmerie, and government-backed militias including the Interahamwe and Impuzamugambi.