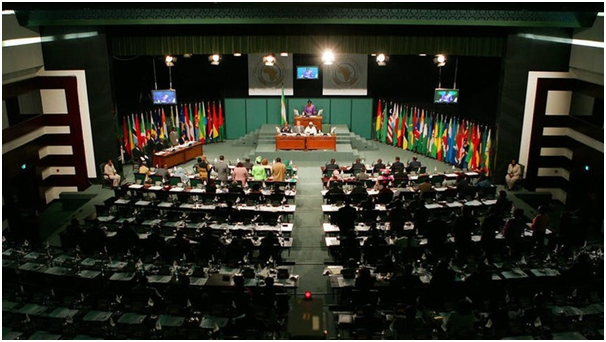 The Pan-African Parliament was established in March 2004, by Article 17 of The Constitutive Act of the African Union, as one of the nine Organs provided for in the Treaty Establishing the African Economic Community signed in Abuja, Nigeria, in 1991.The establishment of the Pan-African Parliament is informed by a vision to provide a common platform for African peoples and their grass-roots organizations to be more involved in discussions and decision-making on the problems and challenges facing the continent.

The Pan-African Parliament (PAP) was set up to ensure the full participation of African peoples in the economic development and integration of the continent. It was intended as a platform for people from all African states to be involved in discussions and decision making on the problems and challenges facing the continent. The protocol that established it gave it an advisory role only. It envisaged that a conference would be organised to “review the operation and effectiveness” five years after it was set up. That conference should have happened in 2009, but never has.

Rather than being elected directly by the people, PAP members are designated by the legislatures of their Member State and members of their domestic legislatures. The ultimate aim is for the Parliament to be an institution with full legislative powers, whose members are elected by universal suffrage. Until such time, the PAP has consultative, advisory and budgetary oversight powers within the AU.

The Unit raises awareness about the programs of PAP, including campaigning for the PAP to become the platform for people from all African states to be involved in discussions and decision-making on the problems and challenges facing the continent – that is for the Parliament to hold direct elections by universal suffrage.  It also raises awareness about what the African Peer Review Mechanism (APRM) is – an instrument for monitoring performance in governance among Member States.