Peace from Below: Women Peace Tables in Bentiu, South Sudan 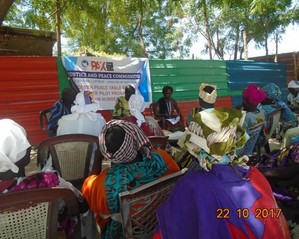 Since the eruption of armed violence across South Sudan in December 2013 millions of people have become displaced, may of whom have found refuge in UN operated Protection of Civilians camps such as the one in Bentiu. There are currently about 150,020 people sheltering from the ongoing violence at the Bentiu PoC site, most of whom are Nuer from Bentiu town. When Taban Deng joined the current government, the Nuer (part of his clan) ‘supporting’ him moved out of the PoC. Relations between the different Nuer groups cooled down. By bringing the communities together JPC-CDoM aims to improve relations within the Nuer community and re-open constructive interaction between those in the PoC and those in Bentiu town.

The South Sudan Council of Churches through its Action Plan for Peace (APP) works on advocacy, neutral forums and reconciliation. The Neutral forums are high level church led local dialogues bringing together conflicting communities across South Sudan. Neutral forums have shown their efficacy, as they for example resulted in periods of ceasefire in Wau and Yambio in 2016.

JPC-CDoM works together with the Inter Church Committee in Bentiu to increase the role of women in peacebuilding activities. The existing ICC women groups of Bentiu have been meeting in both the PoC site and in town organizing very popular ‘prayers for peace’ days. But during a women empowerment workshop which was organized by JPC-CDoM at the beginning of 2017 the participants expressed their desire to extend their activities and become involved in peacebuilding activities.

With the support from PAX South Sudan, JPC-CDoM and the Bentiu ICC are working with the women groups to facilitate dialogue within and across their communities. As part of this work, the women groups engage with local actors in the Bentiu governance structures who can play a key role in leveraging influence of the women in their communities, with regards to those peace and security matters which impact their daily lives. It is expected that with the right support and enough time to prepare well, women in Bentiu can play a crucial role in getting communities back around the table.

Targets and challenges
Important here is the role the women play in the preparatory meetings and setting the ground for dialogue. It is them who shape the process and steps to be taken. If it turns out that they do not have enough leverage within their community, alternative ways will be explored.

We wish to use this pilot to try and set an example from which PAX and its partners can draw lessons and which the SSCC can build on. If successful, similar processes will be initiated under the umbrella of the SSCC in other parts of the country. ‘Successful’ does not necessarily mean ‘resolution of the conflict’ but is defined along the role and experience of the women involved in the process.