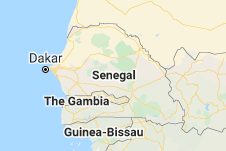 The West African nation of Senegal is bordered by Guinea-Bissau, Mali, and Mauritania and surrounds its much smaller Anglophone neighbor, Gambia. Relatively dry, its shoreline runs along the Atlantic Ocean at the Sahel’s westernmost point. Up to half of its population of 15.4 million (2016) is concentrated around Dakar and other urban areas.

Senegal has been among Africa’s most stable countries, with three major peaceful political transitions since independence in 1960. In a presidential election held on February 24, 2019, the Senegalese people voted in President Macky Sall for a second term. Macky Sall won with 58,27% of the votes with a very high voter turnout of 66,23%. This was followed by Idrissa Seck, former prime minister (20%), Ousmane Sonko (15%), El Hadj Sall (4,07%), and Madické Niang (1,48%). Since the referendum organized in March 2016, Macky Sall will have a 5-year term compared to the 7-year term he served in 2012.

Local elections are scheduled on December 2019 and legislative elections slated for 2022. In 2017, the ruling coalition Benno Bokk Yakaar party (“United in Hope” in the widely-spoken Wolof language) won 125 of 165 seats. A dozen other parties hold seats in the national assembly, including the Coalition gagnante Wattu Senegal, Manko Taxawu Sénégal, and Parti de l’unité et du rassemblement.

Senegal has so far been spared regional security shocks, but activism by terrorist groups in neighboring countries and the higher number of radicals entering the country are factors that risk fueling instability. 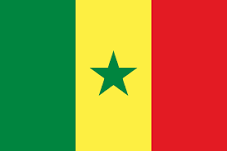 Growth has been high, over 6% since 2014, and the forecast remains optimistic, particularly with oil and gas production expected in 2022. Growth accelerated to over 7% in 2017 and is expected to remain over 6% in 2018 and in the following years. All sectors supported growth in 2018, but agriculture – due to support programs, robust external demand, and large infrastructure investments in the context of Emerging Senegal Plan (Plan Sénégal Emergent or PSE) implementation remain key drivers. Maintaining high growth in the future will require additional efforts to strengthen the efficiency of public investment and to insure the stability of the macroeconomic framework, while sustained reforms to reduce remaining structural constraints would also help boost private investment. Looking forward, growth stands to substantially accelerate when production of offshore oil and gas begins.in 2022.

Despite recent advances, additional efforts to strengthen the macro-fiscal framework would be welcome. The fiscal stance remains under pressure due to fixed domestic energy prices in a context of high international oil prices, resulting in lower revenues and higher energy subsidies. As a result, the 2018 deficit increased to 3.5% (from 3% in 2017) and payments to suppliers were delayed. For 2019, Senegal remains committed to a 3% deficit target (WAEMU’s convergence criterium), yet high commodity prices imply continued constraints on the fiscal balance. Senegal may need further efforts to increase revenues and keep public expenditure under control to reach the deficit target. Looking forward, expected oil and gas production would increase fiscal revenues beginning in 2022.

Public debt continued to increase, but Senegal remains at low risk of distress, partly due to GDP rebasing. Debt (using an expanded perimeter including State Owned Enterprises (SOEs) and para-public entities) is estimated to have increased from 60.6% of GDP in 2017 to 64.5% in 2018. This is partially linked to Eurobonds issuance (around $2.2 billion in March 2018) in good financial conditions. GDP rebasing – which increased GDP by about 30% – and buying back expensive debt with part of the Eurobond proceeds helped maintain a low level of debt distress. Continued growth and fiscal discipline would help reduce debt as a share of GDP since 2019.

The current account deficit remains large, due to high commodity prices and imports of intermediary goods. The Current Account Deficit (CAD) is expected to remain large at 7.3% of GDP in 2018 (similar as in 2017) due to strong energy imports linked to high prices and volumes, but also important intermediary goods and foods imports. High growth and investments also help explain stronger imports. Exports increased rapidly – thanks to strong performance of gold, phosphoric acid and food products – but could not outpace imports. The deficit is expected to worsen in the next few years: large imports linked to important oil and gas investments – but also to high commodity prices – would keep the trade deficit large despite a good export performance. Since 2022, the external balance is expected to improve as oil and gas exploitation and exports start.

National poverty was last measured in 2011 at 46.7% (national poverty line) and 38% using the international poverty line (US$1.9 PPP). No new household consumption data have been collected since, but strong growth suggests a decrease in monetary poverty, driven by the primary sector in rural areas, and construction and services in urban areas.

Non-monetary indicators also improved (access to services and assets ownership) but they suggest a stagnation of inequality. Questions on inclusiveness remain pertinent as job creation is insufficient to absorb internal migration and a growing labor force. Furthermore, most labor is informal, entailing low remuneration, underemployment, and limited social protection.

Poverty should begin to fall faster—from 34% in 2017 to 31.2% in 2020 (IPL)—and by 2020, the decline in the number of poor that started in 2016 should accelerate due to agricultural growth. Under this scenario, poverty reduction in urban areas would be driven by services, remittances, and public construction.

If PSE reforms continue, the poor would progressively be able to access high growth or value-added sectors, such as horticulture or agricultural processing, while the enhanced pro-poor programs that have been unfolding since 2014–15 (including the adaptive social protection program) may reduce vulnerability and build up the asset base of the poor.

What are the current and ongoing human rights issues in Senegal?