The AU and its Anti-corruption Agenda 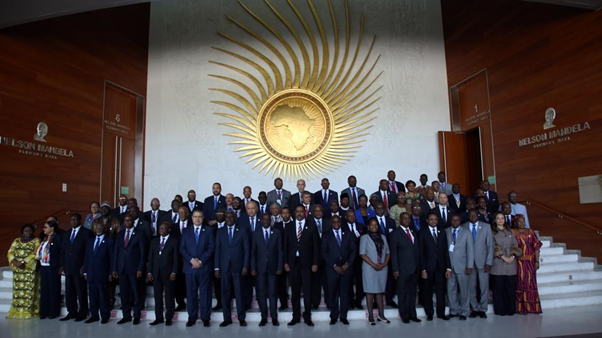 The UN Economic Commission for Africa reported in 2018 that corruption swallows at least $140 billion in all the AU member states every year. Most of this lost wealth is meant to be invested in infrastructure projects, humanitarian aid and good governance.

Nigeria’s ambassador for the AU says that the AU loses estimated $ 50 billion every year because of illicit financial outflows. The AU’s annual budget is dependent on foreign aid by 73 percent. In other words, to put it simply: Various African nations are not capable of financing their own national costs. Therefore, they heavily rely on foreign aid, which mostly comes from outside of Africa. Billions of dollars of this aid do not find its actual recipients, deepening financial vulnerability across the continent.
Enter Mohammed Buhari

The African Union (AU) has entrusted the Nigerian president, Muhammadu Buhari, with the responsibility to spearhead a year-long effort to raise awareness of corruption on the continent. This comes 15 years after Member States adopted the African Union Convention on Preventing and Combatting Corruption (AUCPCC).
At the 2018 AU Summit in Addis, African leaders resolved to step up efforts against corruption. Although Member States are bound by the AUCPCC, corruption on the continent remains a challenge, according to Afrobarometer, a Ghana-based independent pan-African research network that conducts public opinion surveys. More than half of people surveyed by Afrobarometer three years ago found that corruption levels in their countries had increased over the previous year. Only about two of every 10 respondents in the survey thought corruption levels had decreased in their countries. The majorities of respondents in South Africa, Ghana and Nigeria noted an increase in levels of corruption, the research network reported.

The Member States of the African Union adopted the African Union Convention on Preventing and Combating Corruption (The Convention) at the Second Ordinary Session of the Assembly of the Union, held in Maputo (Mozambique), on 11th July 2003. The Convention entered into force on 5th August 2006, thirty (30) days after the deposit of the fifteenth (15th) instrument of ratification. To date Forty Two(42) countries have ratified the Convention and are States Parties to it.

Creation of the Board

The Board is the emanation of The Convention and it was created on 26th May 2009 under Article 22 (1) of The Convention. This organ bases its work on the provisions of this legal instrument and in this regard, it is the unique continental organization mandated by the African Union to deal with corruption and related themes in Africa.

Members of the Board
The Advisory Board is composed of 11 members, two members from each region (East, West, North, South, and Central) and one slot that keeps rotating on the regions. The following are the current Board members:

Mandate of the Board

The main mandate of the Board is to promote and encourage the adoption of measures and actions by State Parties to prevent, detect, punish and eradicate corruption and related offences in Africa as well as to follow-up on the application of those measures and submit a report to the Executive Council on a regular basis on the progress made by each State Party in complying with the provisions of the Convention.

Mission and Vision of the Board

Mission of the Board

Vision
This vision is to be, by 2020, “an efficient organization that provides pertinent support to Member States in the sustainable implementation of the AU Convention and the fight against corruption in Africa”.

Status of Ratification of the Convention on Corruption

A member of the African Union’s anti-corruption advisory board has resigned over the body’s alleged corruption. Daniel Batidam, who served for three years, denounces “multiple irregularities” within the organisation that are hindering its fight against graft.

The Ghanaian, who was elected Chairperson of the AU’s Advisory Board on Corruption in 2015, before becoming an ordinary board member two years later, is leaving before the end of his mandate in 2019, out of frustration.

“It has been virtually difficult if not impossible for the Anti-Corruption Advisory Board to carry out its mandate,” he told RFI.

Abuse of power, lack of transparency and accountability, he says, have hindered his work.

“These issues have come up over and over again,” he comments.

In December 2016, the 11 board members signed a petition to the Chairperson of the AU Commission, the Chadian Begoto Miarom, to address corruption within the organisation.

Despite the Commission setting up an investigation committee in March 2017 to address their complaints, “we still don’t have the final report of that investigation,” regrets Batidam.

The African Union Advisory Board on Corruption was set up in 2009 as a follow-up mechanism to implement the AU’s convention on fighting corruption.

However Batidam says the board is failing in that mandate.

“The board has to be enabled to carry out its mandate, you can’t fight corruption with corruption,” he insists.

Quitting in year to fight corruption

That’s why he’s leaving. His resignation was accepted on June 14 by the Deputy Chairman of the African Union, Kwesi Quartey.

In his letter of response, Quartey wrote that “it is regrettable” that Batidam is leaving “considering that our objective for the year is to fight corruption.”

“If the only thing that is regrettable is the fact that I’m leaving during the Anti-Corruption Year, I think that is pathetic,” retorts the resigning board member.

“We have been raising issues bordering on mismanagement (…) for many years without getting a response. And ironically, I tendered in my resignation, and in less than a week my resignation is accepted.”

For Batidam, it’s a sign that the Commission will “continue with business as usual.”

“It tells me that they’re not interested in looking at the things that I raised in my resignation letter,” he said.

An official from the African Union who spoke on condition of anonymity, didn’t deny Batidam’s claims, but told RFI it was virtually impossible to do anything about them.

Meanwhile, Batidam’s successor as Chairperson of the AU Advisory Board on Corruption, Begoto Miarom, told RFI that his resignation still needed to be validated.

“The letter of response by the Deputy Chairman [Kwesi Quartey] was not valid. It must first get the approval of the African Union’s Advisory Committe,” he said.

Those discussions should take place on the sidelines of the upcoming AU summit in Mauritania from the 1st-2nd of July.

Miarom however, dismissed the corruption allegations raised by Batidam, saying “we are firmly engaged in this year’s campaign theme aimed at fighting corruption.”

However Batidam wants African leaders, when they gather in Mauritania, to put pressure on the African Union to reform.

“It is my hope that they will call on people in high places at the Commission to take responsibility.”

If they don’t, the 52-year-old urges African citizens to question the need for a continental body such as the African Union and its adjoining structures which “are taking millions and millions of dollars to keep running.”

That money could address poverty on the African continent and “yet we are using it to finance corruption. I think this is wrong,” he said.