The East African Community (EAC) was originally founded in 1967, dissolved in 1977, and revived with the Treaty for the Establishment of the East African Community (the Treaty Establishing EAC) signed in 1999 by Kenya, Uganda and United Republic of Tanzania. Burundi and Rwanda became members in 2007 while South Sudan gained accession in April 2016. Underpinned by their historical links, Kenya, Uganda and United Republic of Tanzania had established strong economic cooperation laying the groundwork for further political, economic and social integration of the EAC member States.
The aim of EAC is to gradually establish among themselves a Customs Union, a Common Market, a Monetary Union, and ultimately a Political Federation of the East African States. The Treaty Establishing EAC stipulates the following principles to enhance policy harmonization and integration in the EAC region:
• The attainment of sustainable growth and development of the partner States by promotion of a more balanced and harmonious development of the partner States.
• The strengthening and consolidation of cooperation in agreed fields that would lead to equitable economic development within the partner States and which would in turn, raise the standard of living and improve the quality of life of their populations.
• The promotion of sustainable utilization of the natural resources and taking of measures that would effectively protect the natural environment of the partner States.
• The strengthening and consolidation of the long-standing political, economic, social, cultural and traditional ties and associations between the peoples of the partner States so as to promote a people-centred mutual development of these ties and associations.
• The mainstreaming of gender in all its endeavours and the enhancement of the role of women in cultural, social, political, economic and technological development.
• The promotion of peace, security, and stability within, and good neighbourliness among the partner States.
• The enhancement and strengthening of partnerships with the private sector and civil society in order to achieve sustainable socioeconomic and political development.
• The undertaking of such other activities calculated to further the objectives of the community, as the partner States may from time to time decide to undertake in common.
The organizational structure of EAC consists of the following bodies:
• Summit
• Council of Ministers
• Coordinating Committee
• Sectoral Committees
• East African Court of Justice
• East African Legislative Assembly
• Secretariat
EAC also has eight subsidiary institutions and organizations:
• Civil Aviation Safety and Security Oversight Agency
• East African Development Bank
• East African Health Research Commission
• East African Kiswahili Commission
• East African Science and Technology Commission
• Inter-University Council for East Africa
• Lake Victoria Basin Commission
• Lake Victoria Fisheries Organization 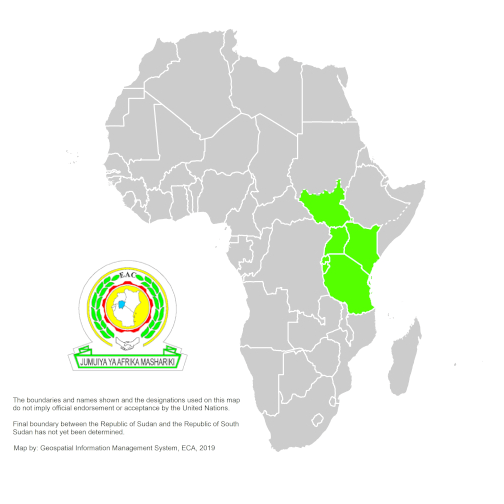