The Economic Community of West African States was established by the Treaty of Lagos signed by fifteen West African Heads of State and Government of in May 28, 1975. The treaty of Lagos was initially limited to economic cooperation but emerging political events led to its revision and expansion of scope of cooperation in 1993. Cabo Verde joined in 1976 and Mauritania decided to withdraw in 2000 to join the Arab Maghreb Union. The vision of ECOWAS is to promote cooperation and integration, leading to the establishment of an Economic Union in West Africa in order to raise the living standards of its peoples, to maintain and enhance economic stability, foster relations among member States as well as to contribute to the progress and development of the African Continent. The Revised Treaty of ECOWAS states the objectives as:
• the harmonization and co-ordination of national policies and the promotion of integration programmes, projects and activities, particularly in food, agriculture and natural resources, industry, transport and communications, energy, trade, money and finance, taxation, economic reform policies, human resources, education, information, culture, science, technology, services, health, tourism, legal matters;
• the harmonization and co-ordination of policies for the protection of the environment;
• the promotion of the establishment of joint production enterprises;
• the establishment of a common market;
• the establishment of an economic union through the adoption of common policies in the economic, financial, social and cultural sectors, and the creation of a monetary union.
• the promotion of joint ventures by private sector enterprises and other economic operators, in particular through the adoption of a regional agreement on cross border investments;
• the adoption of measures for the integration of the private sectors, particularly the creation of an enabling environment to promote small and medium scale enterprises;
• the establishment of an enabling legal environment;
• the harmonisation of national investment codes leading to the adoption of a single Community investment code;
• the harmonization of standards and measures;
• the promotion of balanced development of the region, paying attention to the special problems of each Member State particularly those of landlocked and small island Member States;
• the encouragement and strengthening of relations and the promotion of the flow of information particularly among rural populations, women and youth organizations and socio-professional organizations such as associations of the media, business men and women, workers, and trade unions;
• the adoption of a Community population policy which takes into account the need for a balance between demographic factors and socio-economic development;
• any other activity that Member States may decide to undertake jointly with a view to attaining Community objectives.
The organizational structure of ECOWAS consists of the following institutions and specialized agencies:
Institutions:
• The Authority of Heads of State and Government
• The Council of Ministers;
• The Community Parliament;
• The Economic and Social Council;
• The Community Court of Justice;
• The ECOWAS Commission;
• The ECOWAS Bank for Investment and Development (EBID);
• The West African Health Organization
• The Inter-Governmental Action Group against Money Laundering and Terrorism Financing in West Africa (GIABA)
Specialized Agencies:
• West African Monetary Agency (WAMA)
• Regional Agency for Agriculture and Food (RAAF)
• ECOWAS Regional Electricity Regulatory Authority (ERERA)
• ECOWAS Centre for Renewable Energy and Energy Efficiency (ECREEE)
• The West African Power Pool (WAPP)
• ECOWAS BROWN CARD
• ECOWAS Gender Development Centre (EGDC)
• ECOWAS Youth & Sports Development Centre (EYSDC)
• West African Monetary Institute (WAMI)
• ECOWAS infrastructure Projects Preparation and Development Unit (PPDU)
The member States of ECOWAS are: Benin, Burkina Faso, Cabo Verde, Côte d’Ivoire, The Gambia, Ghana, Guinea, Guinea Bissau, Liberia, Mali, Niger, Nigeria, Senegal, Sierra Leone and Togo. 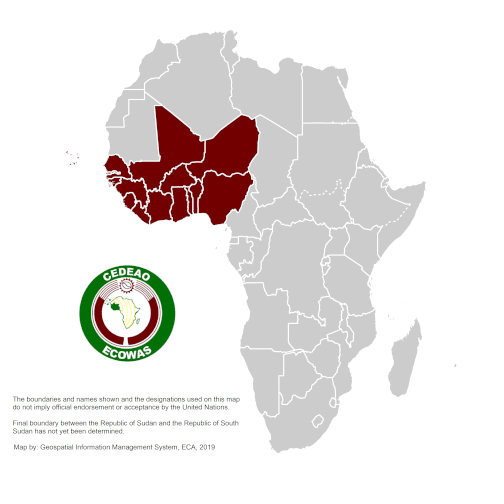