AU Watch also offers customized short courses to academic institutions, national and international bodies and NGOs from around the world. In the past lawyers, university students, human rights activists, journalists, NGO members people with an interest in human rights have also benefitted from such bespoke courses.
Many prisons officials know almost everything about the United Nations Standard Minimum Rules for the Treatment of Prisoners, theDeclaration on the Basic Rights of Prisoners and the United Nations Standard Minimum Rules for non-custodial measures (the ‘Tokyo Rules’). Using those standards, some African countries have made significant progress in reforming penal systems by addressing overcrowding and implementing reintegration programmes.

A key aim of the course isto popularise and evaluate the contribution of the African standards to penal reform. The course is, therefore, mindful of the key role played by Africans in formulating an agenda for penal reform through the 1999 Egham Conference on ‘A New Approach for Penal Reform in a New Century’. It will also explain and critique steps that have been taken to implement these standards at an African level through the activities of the African Commission on Human and Peoples’ Rights and its Special Rapporteur on Prisons and Conditions of Detention and also at the level of Member States. 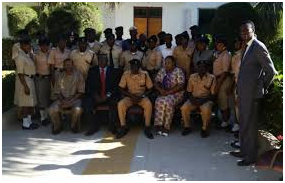 The course emphasises the importance of a criminal justice policy that controls the growth of the prison population and encourages the use of alternatives to imprisonment as recommended by the participants at the second pan-African Conference on Prison and Penal Reform in Africa, held in Ouagadougou, Burkina Faso between 18-20 September 2002/

A key aim of this short course,which can be tailored to suit various prison administrations, isto popularise and evaluate the contribution of African standards to penal reform.

Educating people about human rights, especially those in positions of authority, is fundamental to protecting and promoting them.

This course utilises a broad range of approaches from the social sciences and humanities in order to develop a nuanced understanding of human rights and human rights abuses within the prison administration system. It aims to provide an insight into some of the key debates and an overview of important literature in this growing area of scholarship.

MODULE 2: PROHIBITION OF TORTURE AND ILL-TREATMENT

MODULE 2: UNDERSTANDING THE RIGHTS OF PRISONERS

MODULE 4: ROLE OF THE AFRICAN COMMISSION AND ITS PRISON MECHANISM

This module aims to provide all participants – regardless of whether they have a legal background – with a firm understanding of how human rights are concretely translated into regional law through the mechanism of the African Commission.

This module will introduce students to the theories and methods of qualitative social sciences research and how they can be applied to the study of human rights.

Students will reflect on the theoretical context, key concepts and tools of social sciences research in order to articulate a critical perspective on human rights

Students will learn how to identify a range of ethical issues and how to overcome them, understand how qualitative data is collected, analysed, interpreted, appreciate how quantitative and qualitative methods can be combined in interdisciplinary human rights research and articulate methodological steps for Human Rights Impact Assessments.

Participants will be provided with detailed course materials (essential and additional readings for each session) and a full set of regional human rights Law documents.

Students will emerge with a deeper and more complex understanding of what human rights are, but especially the African human rights system and why they are important, of both their potential and limitations, and of the increasingly wide range of contexts within the prison system in which they are being applied, used and abused.

Our course also exposes participants to the practical work of various human rights actors, the contexts in which they operate, the techniques they use, and the challenges they face.

The course is intended for staff members of prisons, police and those working in the field of prisons management. However,candidates with specific research interests in these areas are also encouraged to apply. Candidates should have a good written command of English and have high competence and comfort with computer and Internet use.