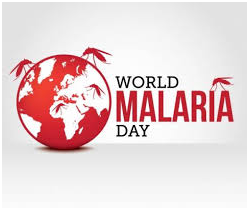 25th April sees the observance of World Malaria Day, which was established in May 2007 by the 60th session of the World Health Assembly, the World Health Organization’s decision-making body. The day was established to provide education and understanding of malaria and to recognise global efforts to control this disease. This year’s theme is “Zero malaria starts with me”.

Malaria is a preventable and treatable infectious disease transmitted by mosquitoes that kills more than one million people each year, most of them in sub-Saharan Africa, where malaria is the leading cause of death for children under five.

After more than a decade of steady advances in fighting malaria, progress has levelled off. According to WHO’s latest World malaria report, no significant gains were made in reducing malaria cases in the period 2015 to 2017. The estimated number of malaria deaths in 2017, at 435 000, remained virtually unchanged over the previous year. However, globally, more countries are moving towards elimination: in 2017, 46 countries reported fewer than 10 000 malaria cases, up from 44 countries in 2016, while in 2016, WHO identified 21 countries with the potential to eliminate malaria by the year 2020.