What is the AU Saying?

AGENDA 2063 is Africa’s blueprint and master plan for transforming Africa into the global powerhouse of the future. It is the continent’s strategic framework that aims to deliver on its goal for inclusive and sustainable development and is a concrete manifestation of the pan-African drive for unity, self-determination, freedom, progress and collective prosperity pursued under Pan-Africanism and African Renaissance The genesis of Agenda 2063 was the realisation by African leaders that there was a need to refocus and reprioritise Africa’s agenda from the struggle against apartheid and the attainment of political independence for the continent which had been the focus of The Organisation of African Unity (OAU), the precursor of the African Union; and instead to prioritise inclusive social and economic development, continental and regional integration, democratic governance and peace and security amongst other issues aimed at repositioning Africa to becoming a dominant player in the global arena.

As an affirmation of their commitment to support Africa’s new path for attaining inclusive and sustainable economic growth and development African heads of state and government signed the 50th Anniversary Solemn Declaration during the Golden Jubilee celebrations of the formation of the OAU /AU in May 2013. The declaration marked the re-dedication of Africa towards the attainment of the Pan African Vision of An integrated, prosperous and peaceful Africa, driven by its own citizens, representing a dynamic force in the international arena and Agenda 2063 is the concrete manifestation of how the continent intends to achieve this vision within a 50 year period from 2013 to 2063. The Africa of the future was captured in a letter presented by the former Chairperson of the African Union Commission, Dr. Nkosazana Dlaminin Zuma.

The need to envision a long-term 50 year development trajectory for Africa is important as Africa needs to revise and adapt its development agenda due to ongoing structural transformations; increased peace and reduction in the number of conflicts; renewed economic growth and social progress; the need for people centered development, gender equality and youth empowerment; changing global contexts such as increased globalization and the ICT revolution; the increased unity of Africa which makes it a global power to be reckoned with and capable of rallying support around its own common agenda; and emerging development and investment opportunities in areas such as agri-business, infrastructure development, health and education as well as the value addition in African commodities

Agenda 2063 encapsulates not only Africa’s Aspirations for the Future but also identifies key Flagship Programmes which can boost Africa’s economic growth and development and lead to the rapid transformation of the continent.

AU Watch’s Contribution to Agenda 2063 For a United Africa

In 2015, African leaders adopted Agenda 2063 as the continent’s new long-term vision for the next 50 years. As you probably now know, Agenda 2063 aims to optimise the use of Africa’s resources for the benefit of the continent’s people. Various institutions and agencies of the AU, including NEPAD have been tasked with fast-tracking the implementation and monitoring of major continental development programmes and frameworks, including Agenda 2063 and the Sustainable Development Goals (SDGs).

AU Watch is now documenting for publication work for the first five years as to how the AU and its Members are domesticating the first 10-year Implementation plan into national and regional plans. Furthermore, work is progressing in developing indicator-frameworks to track Agenda 2063, and by extension the SDGs. Specifically, efforts are underway to establish near to real-time tracking and periodic evaluation mechanisms, with dedicated focus on building institutional capacities to generate quality statistical data.

We are now building platforms for sharing expertise to inform effective domestication and planning, promote best practices on implementing, tracking and reporting on the targets and goals enshrined in the first ten years of Agenda 2063 implementation.

Event:
In support of Africa’s Agenda 2063: pathways for a united Africa 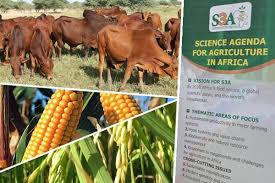 Theme: Finally, an Answer For Food Security in Africa

This conference and workshop will be convened between senior African policy and technical experts from governments, regulators, academia, industry and their regional and international partners. The participants will consider the successes and challenges related to food  security in Africa under the Agenda 2063 programme of AU Watch. It will identify pathways for expanding and strengthening the contribution of agricultural applications to support Africa’s development goals (Agenda 2063, the UN Sustainable Development Goals and the Common African Position (CAP post-2015)) as well as to develop a common understanding of regional positions on how to ensure an Africa that is hunger free.

Can you help us? Get connected, Have your say. Discuss what Africa should look like in 2063. Share a multimedia and become a participant by logging on www.agenda2063.au-watch.org; Or you can send an email to [email protected]