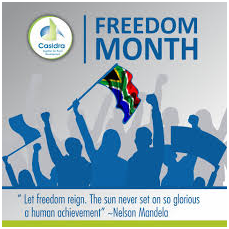 Freedom Month is observed in April throughout South Africa to celebrate the dawn of freedom and democracy and the achievements of all South Africans in moving away from hatred, divisions and a painful history to build a common future together.

April will forever resonate in the history of our nation as the month that saw the first democratic elections in 1994 that gave birth to freedom and constitutional democracy in South Africa. This election marked turning point that saw the previously disadvantaged become part of the South African political processes. The country belongs to all who live in it.

The 1994 breakthrough promotes the values of freedom and democracy that are an integral part of our Constitutional democracy. Freedom Day is celebrated on 27 April in celebration of the historic participation of all the people of South African citizens in the first free and fair democratic elections