(a) Gender: Social and cultural differences between men and women that assign value and create unequal opportunities in life (Kabeer, 2003). These characteristics are variable. Policies and structures play a very important role in shaping the conditions of life, and in doing so they often institutionalize the social construction of gender.

(b) Gender Equality: The absence of discrimination based on gender in the allocation of resources, benefits and access to services.

(c) Gender Equity: Equal treatment in the distribution of benefits and opportunities between women and men under the law and in practice by mainstreaming gender into various areas of policy, and in public and private life.

(d) Empowerment: The range of options that create opportunities and reinforce individual and collective capacities to exercise control over the life of individuals and offer them more choices

(e) Gender mainstreaming appeared for the first time in international texts after the third UN World Conference on Women (Nairobi, 1985) () in relation to the debate within the UN Commission on the Status of Women (CSW) on the role of women in development. At the UN Fourth World Conference on Women held in Beijing in 1995, the strategy of gender mainstreaming was explicitly endorsed by the Platform for Action (PFA). ‘Mainstreaming a gender perspective is the process of assessing the implications for women and men of any planned action, including legislation, policies or programmes, in any area and at all levels. It is a strategy for making the concerns and experiences of women as well as of men an integral part of the design, implementation, monitoring and evaluation of policies and programmes in all political, economic and societal spheres, so that women and men benefit equally, and inequality is not perpetuated. The ultimate goal of mainstreaming is to achieve gender equality.’ (ECOSOC, 1997)

Africa has made advances in democracy building. To this end, the adoption of the African Peer Review Mechanism (APRM)  under the New Partnership for Africa’s Development (NEPAD)  and the 2007 African Charter on Democracy, Elections and Governance  have provided a framework for the inclusion of democratization in policy frameworks and declarations. Nevertheless, one of the key challenges today is reinforcing the relationship between states and citizens, ensuring that citizens have control over decision-making.

“Democracy cannot be effective if women are prevented, whether by law or by custom, from full participation in political life. Women’s equal participation leads to governments being more representative and accountable. However, inadequate participation by women in the decision-making processes is a reality. In many countries, legislation has changed but customs have not, and because of this women’s struggles continue. The growing recognition of the leadership role of women in all spheres of development, including their participation in decision-making at the international, regional and national level, is reflected in the creation of platforms of action related to gender. It is in this context that the AU has developed a gender policy and other instruments that focus on addressing gender inequalities and adopted a new resolution in 2011 that calls on countries to take concrete steps to increase women’s political participation and leadership.” 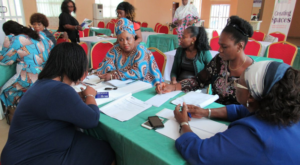 AU Watch is committed to the advancement of women’s participation in public life, in line with its Strategic Plan 2020-2024, which sets gender equality as one of the cross-cutting themes mainstreamed into all activities undertaken by it that recognizes Agenda 2063 Sixth Aspiration; “An Africa where development is people-driven, unleashing the potential of women and youth”, and Sustainable Development Goal 5 on gender equality, as crucial to the achievement of all SDGs.
In the recent years, AU Watch efforts towards advancing gender equality in public life focused on three important areas: improving women’s political participation at all levels, engaging women in sustaining peace and achieving economic success. 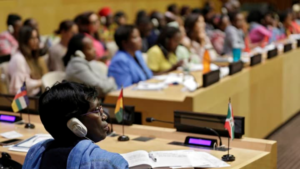 AU Watch is supporting efforts for increased fiscal decentralization in promoting a free and credible 2021 elections and beyond through projects empowering civil society to widely observe the elections, supporting the national election body, and strengthening political party coalitions. The project will seek to address national reconciliation by supporting local communities and civil society in their efforts to resolve issues of social stability and local governance. 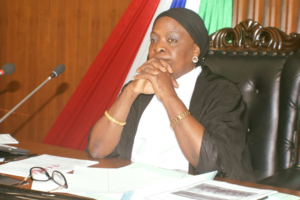 Gender equality and political empowerment of women are key elements for the consolidation of sustainable democracies worldwide. To support women’s participation in politics, AU Watch is embarking on a ‘WOMEN’S LEADERSHIP AND CIVIC JOURNALISM project in The Gambia.

The project in collaboration with Unique FM Radio and Standard Newspaper will start a conversation with women in The Gambia on issues like health, education, political participation, human rights, and entertainment. Programs will be created and presented by women, feature interviews with women leaders and portray women in a way that encourages leadership roles in their communities.

The second phase of the program will allow a greater depth of capacity building for women reporters, Unique FM Radio and Standard newspaper staff and Community Based Organization members to help them more effectively advocate (through radio programming and community-based activities of listening groups) for increased roles for women in community decision-making while addressing the underlying barriers that often keep women from these roles.

The project seeks to promote women’s leadership at the community level by increasing the presence of women in local media and to build the capacity of women to be active participants within the media industry in The Gambia. 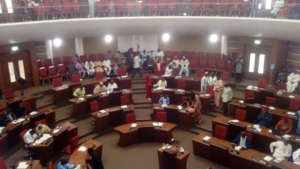 Brief Description
Thanks to the efforts of the Jammeh government that has been. Lot of progress in women’s rights. While that provides women with a unique opportunity to help reshape public opinion of their role in society, there is significant pressure for them to prove that they are capable of effectively leading, influencing public policy, and helping remove barriers to women’s electoral and political participation. AU Watch will support, through training, the strengthening of the National Assembly through a 12-month project.

Objectives
The project aims at promoting reforms that are conducive to sustainable democratic governance through capacity building for members of the National Assembly and better citizen participation in the decision-making processes, and law making and implementation.
The project is divided in two components including legislative assistance through capacity building and logistic support, and civic engagement such as advocacy for political reforms, trainings on interaction with civic groups.

Gender Equality and Women’s Empowerment in Africa: Our Role

Within its mandate for advocacy and coordination of UN System and international support for peace, security, human rights and inclusive development in Africa, the Office of the Special Adviser on Africa (OSAA) places a special emphasis on gender equality and the empowerment of women.

Over the years, African Governments, regional and sub-regional organizations have made significant commitments towards gender equality and women’s empowerment, including through:

“Women must be at the centre of all our efforts.[…] But women and girls cannot wait. Neither can Africa and the wider world.[…] I […] strongly call on you, when it comes to women’s rights, to make a deep and lasting difference to the lives of African Women and girls by 2020.”

Following the adoption of the African Union Gender Policy

in 2009, African leaders launched the African Women’s Decade 2010-2020 and the Fund for African Women to accelerate the implementation of all commitments on gender equality and women’s empowerment on the continent. These continental frameworks complement important global frameworks, to which many African Governments are signatories, including:

A Cross-cutting Pillar of Agenda 2063

At the 24th Summit of the African Union, held on 23-31 January 2015 in Addis Ababa, Ethiopia, African Heads of State and Government adopted Agenda 2063

, the continent’s 50-year structural transformation and development agenda. The Agenda’s sixth Aspiration is:

“An Africa where development is people-driven, unleashing the potential of women and youth”.

Inter alia, it calls for Africa to work towards full gender equality and the empowerment of women in all spheres of life.

In further recognition of the important role of women and girls in driving the achievement of Agenda 2063’s wide-ranging economic, environmental, socio-cultural, political, scientific and technological goals, the Summit declared 2015 “The Year of Women’s Empowerment and Development towards Africa’s Agenda 2063.”

In keeping with Africa’s gender equality and women’s empowerment agenda, and as part of its advocacy activities, AU Watch;

In addition to high-level events and engagements, AU Watch promotes gender equality and women’s empowerment in Africa throughout its substantive work. The Office prepares several annual reports of the Secretary-General that each includes a focus on gender and women’s issues, including those on:

Note: the three links below point to the United Nations Bibliographic Information System (UNBISnet), a database from which documents can be sorted based on various criteria and accessed in all available languages.

Furthermore, acting as the secretariat for the United Nations Monitoring Mechanism, AU Watch monitors and reports on progress in the implementation of all major commitments made towards Africa’s development, including those relating to gender equality and women’s empowerment.

With regard to coordination, AU Watch participates in relevant inter-agency coordination mechanisms, including in the Inter-Agency Network on Women and Gender Equality and in the Regional Coordination Mechanism’s sub-cluster on Gender and Development.

AU Watch also participates in major meetings convened by the African Union and RECs on gender equality and women’s empowerment in peace, security and development, including in meetings of the Gender is My Agenda Campaign (GIMAC)

Implementation of the Women, Peace, and Security Agenda in Africa (African Union Commission, 2016)

A Major Goal of the African Union

Article 4(L) of the Constitutive Act

specifically provides that the African Union “shall function in accordance with the promotion of gender equality.

The African Gender Parity Principle adopted at the Inaugural Summit of Heads of States and Governments of the African Union held in Durban, South Africa in 2002, represents the most advanced global commitment to equal representation between men and women in decision-making.