The Common Market for Eastern and Southern Africa (COMESA) was formed in December 1994 to replace the former Preferential Trade Area (PTA) from the early 1980s in Eastern and Southern Africa. COMESA was created to serve as an organization of free independent sovereign States that have agreed to cooperate in developing their natural and human resources for the good of all their people. In this context, the main focus of COMESA has been on the formation of a large economic and trading unit to overcome trade barriers faced by individual States. The objectives of COMESA reflect its priorities to promote sustainable economic development:
• to attain sustainable growth and development of the member States by promoting a more balanced and harmonious development of its production and marketing structures;
• to promote joint development in all fields of economic activity and the joint adoption of macro-economic policies and programmes to raise the standard of living of its peoples and to foster closer relations among its member States;
• to co-operate in the creation of an enabling environment for foreign, cross border and domestic investment including the joint promotion of research and adaptation of science and technology for development;
• to co-operate in the promotion of peace, security and stability among the member States in order to enhance economic development in the region;
• to co-operate in strengthening the relations between the Common Market and the rest of the world and the adoption of common positions in international fora; and
• to contribute towards the establishment, progress and the realisation of the objectives of the African Economic Community.
The organizational structure of COMESA consists of the following Organs:
• The COMESA Heads of State and Government (COMESA Authority);
• The Council of Ministers
• The COMESA Court of Justice
• The Committee for the Heads of Central Banks
• The Intergovernmental Committee
• The Technical Committees;
• The Secretariat.
COMESA has established a number of institutions to support the private sector. These include:
• The Trade and Development Bank for Eastern and Southern Africa (PTA- Bank);
• The COMESA Clearing House;
• The COMESA Leather and Leather products Institute (LLPI);
• The COMESA Re-Insurance Company (ZEP Re);
• The COMESA Monetary Institute (CMI);
• The African Trade Insurance Agency (ATI);
• The COMESA Competition Commission (CCC);
• The COMESA Regional Investment Agency (RIA);
• The COMESA Business Council (CBC)
• The Alliance for Commodity Trade for Eastern and Southern Africa (ACTESA);
• The Federation of National Associations of Women in Business. 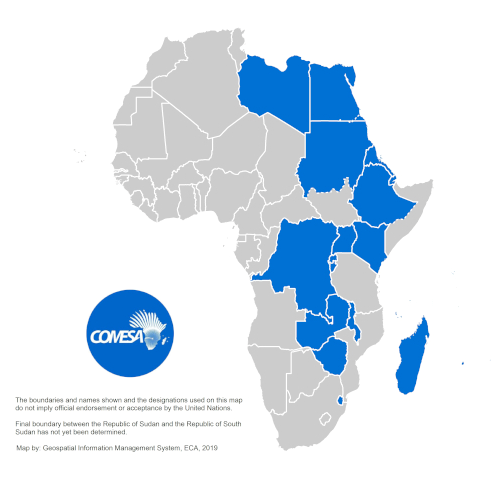